Some franchise owners have franchisees that use non-USD currency and need their Sales and Labor data reported on the DSS in USD. To aid in this conversion, an owner has the option to convert this current and historical data into USD Currency on each Daily Sales Summary brought in from the POS. This enables owners to compare all of their Locations, regardless of their Currency type.

It is important to note the following:

Currency rates must first be set up and later managed manually in Restaurant365 via the Import Tool. Whenever currencies are initially set up or a new currency is added to an existing Conversion List, Users must use the 'Create New' template while the 'Update Existing' template is used to update Exchange Rates over time. 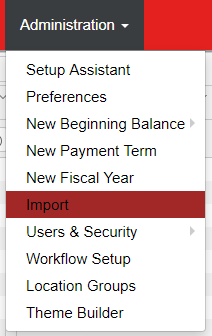 To get to the Import Tool, navigate to 'Import' under the 'Administration' tab in the top ribbon.

The 'Create New' file is used when creating a new Currency List or importing a new non-USD Conversion Rate. Once the 'Import' window opens, type in 'Currency Exchange Rate' in the 'Options' field and 'Create New' in the 'Type' field. Clicking 'Download Template' will download the template used to create this list of currencies and their exchange rates or upload a new currency after the initial setup.

Import the completed Conversion List by clicking 'Upload File' and selecting the new Conversion List. Click here for an example of a correctly imported currency list and here for more information on the Import Tool.

The 'Update Existing' file import is used when exchange rates change and need to be updated in the system. Once the 'Import' window opens, type in 'Currency Exchange Rate' in the 'Options' field and 'Update Existing' in the 'Type' field. Clicking 'Download Template' will export a list of all imported currencies and their conversion rates, which can then be updated and uploaded back into R365 via the 'Upload File' button. Click here for more information on the Import Tool.

After setting up the correct Currencies and their Conversion Rates, an owner would then need to update the POS Currency on the Location record of the Location that uses non-USD Currency.

When the zip code on the Location record is set to an area outside of the United States, the field 'POS Currency' will appear on the 'POS Integration Settings' tab, as shown in the image below.

The default currency will be USD, but this field can be changed by using the drop-down arrow.

Conversions on the Daily Sales Summary

When the Daily Sales Summary comes in, the Currency is already converted into USD Currency, and the Exchange Rate is listed above the grid on the right-hand side for quick reference.